Completed: 8. Go to a Female Strip Club and 13. Eat at a Diner in the Middle of the Night

It’s a bucket list two-fer, ladies and gents! A group of my favorite ladies, who are as equally warped as me, accompanied me to a female strip club. Then, on the way home, my friend Anne and I ate a diner around 1:30 in the morning, another 2014 goal.

Why did I want to go? It’s as simple as this: I’ve never been to one and don’t want to judge elements of this world without experiencing them. Also, I have major nudity hang-ups thanks to my guilt-ridden, Catholic upbringing and want to rid myself of them. So, here’s what I experienced:

I’m glad I experienced this, mostly because I can say that I’ve been there, done that, and will probably never do it again. It was as pleasant of an experience as a strip club can be for a first timer.

2. Eat at a Diner in the Middle of the Night

On our way home, Anne agreed to stop to get something to eat, thereby completing another goal. I added this to my list because in my 31 years on earth, I’ve never eaten at a restaurant past 9 pm. And I’ve never done so after a raucous night out. At this time of the evening, my only priority is to sleep and I’d rather go to bed hungry than not get my eight hours of sleep.

I was especially excited because, believe it or not, this was Anne’s first time at IHOP. So many new life experiences!

Kris, feeling neglected due to his wife’s decision to go to a strip club without him, also went out with friends. On his way home, the timing worked out and he was also able to join us at IHOP. 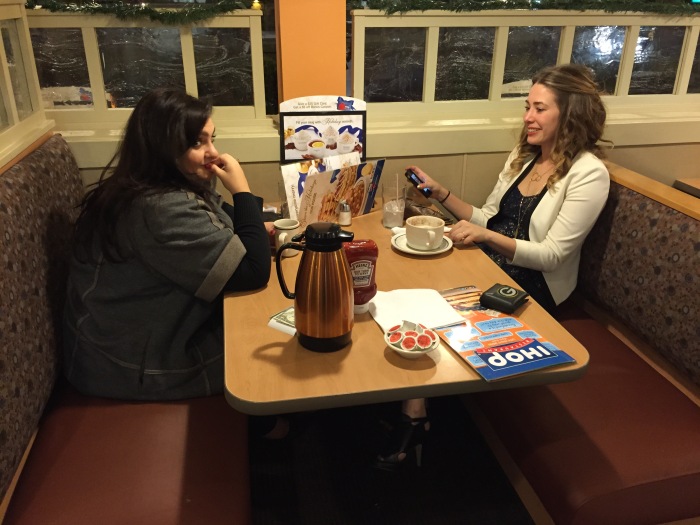 I went to bed at 3:30/4 and woke up around 9:30. I’ve been miserable all day because I didn’t get a full night’s sleep, but it was worth the experience and definitely worth spending extra time with Anne,  Kris, and completing this goal.

My night in one glorious image:

(A big thank you to Tali, Deborah, Erin, and Anne for helping me complete this goal.)

7 thoughts on “Goal Two-fer: Go to a Female Strip Club and Eat at a Diner in the Middle of the Night”