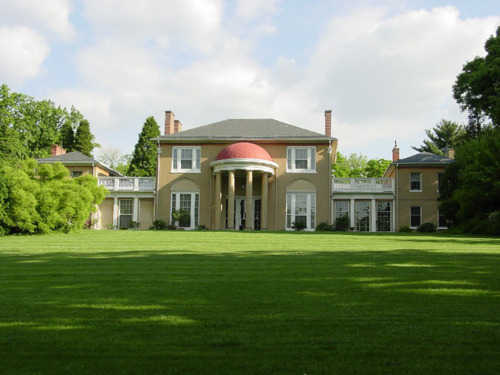 Done! #24.2 Visit the following places that I’ve never been: Tudor Place. Note: I stole this pic from the internet. The front of the house is currently under construction and the picture I took doesn’t capture how it usually looks.

After I read “Martha Washington: An American Life” last year, I started doing research on Martha and George Washington’s family trees. I learned that her granddaughter, Martha Parke Custis (who eventually took on her husband’s last name Peter), lived her adult life in a house in D.C. called Tudor Place. She bought the land with the money she inherited from her step-grandfather, George Washington. And the best part? This house is still around and currently operates as a museum.

Additional factoids that made me want to visit:

So, today, on this glorious Presidents’ Day, I took a trip to the mansion with my friend, Erin. Aside from not being able to take pictures in the house, it was pretty cool.

A few things we saw and/or learned during the tour:

If you’re in the D.C. area, I suggest taking a trip to Tudor Place. Apparently the gardens are very beautiful, so it looks like I’ll have to make another trip in the spring/summer.