Completed: 18. and 19. Visit the Statue of Liberty and Ellis Island 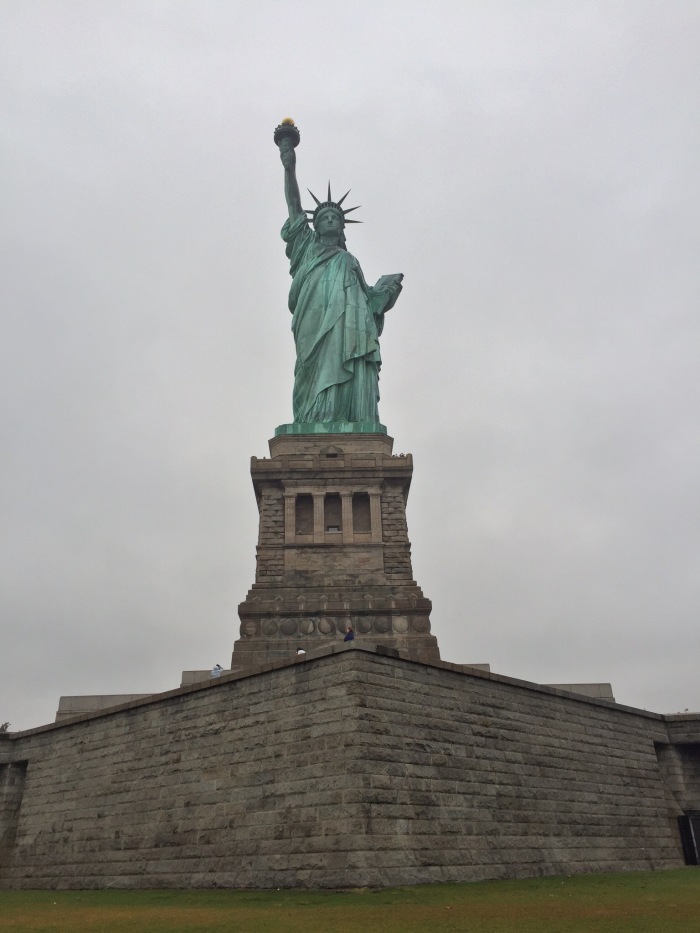 There few things in this world I enjoy more than sightseeing. I’ve been lucky enough to visit some of the most amazing places in Europe (and often brag and rub that fact in Lyssa’s face), but I was a bit embarrassed to say that I’ve never been to the Statue of Liberty.

A gift from the French, this statue is so much more than copper, iron, and steel. It’s a symbol of our country. Upon entering America, millions of hopeful immigrants saw this statue as they entered the harbor in their effort to find a better life in America. It’s a powerful monument with such significance.

There was roughly a two month wait for tickets, which included a trip to the top of the crown, because let’s face it — if you’re going to go, you need to go all out!! I bought our tickets in spring and we just now visited in November.

As we came closer to the day, I started to rethink the trip. I saw that the weather would be miserable and rainy, Lyssa was battling a cold, and I just didn’t really want to make the day trip to New York. I was in a rut, but Lyssa set my head straight and got me hyped me up by sending me pictures and facts.

We left the house at around 3:30 a.m to ensure we’d make our 5:00 a.m. bus. Now you understand why I wasn’t looking forward to the trip. It was about 50 degrees and rainy when we arrived in New York, but we made it! We grabbed a bite to eat and headed over to the ferry to begin our journey to the Statue of Liberty and Ellis Island. My favorite part of the trip was the moment right before we boarded the boat to Liberty Island. You get a chance to see the statue off into the distance.

When we got to the island, we immediately made our way up to the top. Well, after two security checkpoints, after which we had to put all of our possessions (excpet cameras, medicine, and water) into a locker, we did.

The National Park website states for those with crown tickets:

“The climb is strenuous and not without risk. The National Park Service recommends that crown visitors have no significant physical or mental conditions which would impair their ability to complete the climb, such as (but not limited to):

Considering I suffer from three of the above-mentioned ailments (Claustrophobia, Acrophobia, and Vertigo), I knew I was going to be in a world of hurt. As I mentioned earlier, Lyssa wasn’t feeling well, so 377 steps could also pose a challenge for her as well. We started out in a normal-sized staircase, but then we reached the spiral staircase leading up to the crown. Lucky for me, the space was actually too small to have an opportunity to look down. And I do mean small — neither of us are taller than six feet and we struggled to avoid hitting our heads on the steps ahead of us.

When we reached the top, it was so worth any discomfort along the way. I was literally in her crown! A bit of reflection of the awesomeness of my current location, and we were ready to head down. That and the NPS guide informed us that the head was built to sway about two inches and though not accessible to the public, her torch can sway about 8-9 inches. “Close your eyes. You might be able to feel it,” he told us. No thanks. Time to walk down.

We started walking down the small spiral staircase and that’s when it got real. I started to get scared because I was finally able to see how high I was. Yea… that was tough.

We finally descended the 377 steps and boarded our boat to Ellis Island. I must admit, I was excited to go to Ellis Island, but not nearly as much as the Statue of Liberty. Lyssa was really excited because all of Lyssa’s family actually came to America through this entry point, and as late as the ‘20s.

Unfortunately, because of Hurricane Sandy’s damage, a lot of the artifacts have since been removed and moved to a safer location until they can guarantee the humidity levels in the building are safe. That took a lot away from me and my experience and I wish I would have known about that. Many of the rooms at the island had pictures and descriptions of what life was like, but let’s be real, I can always read about that on the internet.

In total, it took us about two and a half hours to visit everything. l feel pretty damn good about completing this goal.  It’s goals like these that make me feel good we started this bucket list experiment.