Completed: 2. Be More Flexible With Plans

There are quirks that only partners witness that would probably surprise outsiders. For Kris, this particular quirk bugs the hell out of me. He might seem like an easy-going person, but once his plans (or no plans) are set, he doesn’t budge. It’s like pulling teeth to get him to do something at the last minute if he hasn’t had time to run through the plan at least a billion times in his head. Even more annoying is when he runs through his minute-by-minute plans out loud. When he doesn’t have time to run through every scenario, he gets so discombobulated and out of sorts, it’s almost funny. I’m pretty laid back and adapt to changes in my environment with ease, so his strict constraints give me anxiety. Go with the flow, man.

I came out of the gate early and hard on this one, totally ruining one of our cherished Saturday routines. We work out separately and meet at coffee shop afterward. But instead, I picked him up at the gym blasting Billy Ocean’s “Get Out of My Dreams, Get Into My Car” (he was shocked) to set he mood and drove him to an unknown destination to have breakfast. He was desperate for information, but I didn’t tell him until we entered DC that my plans were to have breakfast on the steps of the Lincoln Memorial. Then, we completed Kris’ Capital bike share goal, an impromptu plan. I think our first and very successful flexibility test proved to him that spontaneity isn’t so scary. 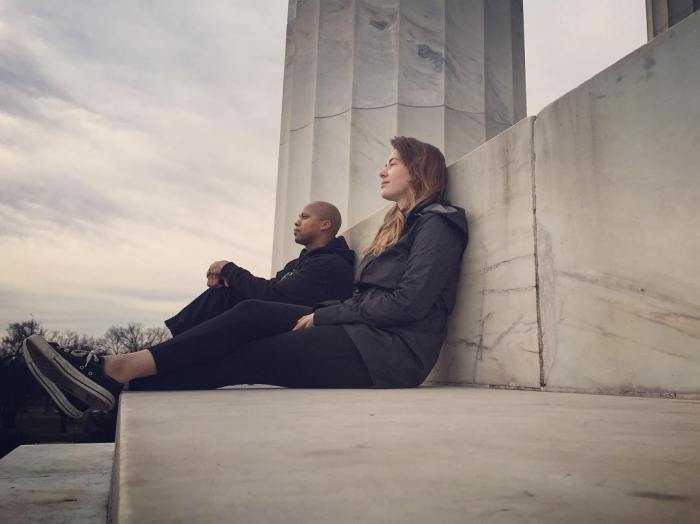 Then there was the time I ruined our Saturday plans again and took him to another unknown location — a random deli in Falls Church with a menu he hadn’t scrutinized beforehand. There were the times I’d lie and say we had plans only to stay home. He hated it. Then he started to initiate changing the flow — he spontaneously came into DC to visit me and even suggesting trying new things.

Sometimes he still asks me, “so what are your plans today?” which is a question that annoys the hell out of me because I know that he’s only asking to think through my plans and build out all of the potential scenarios that might impact him.

Despite a few residual Type A-like tendencies, he has done an amazing job. Planning (or not planning) things with him was so much more pleasant this year. I’m happy he took this challenge on and knocked it out of the park. Will it stick? Probably not, but at least he had a pleasant experience going with the flow.